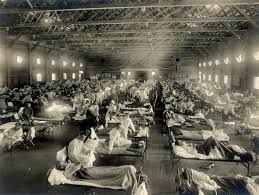 The first victim of “Spanish flu” was private Albert Gitchell, March 4, in Kansas. By the end of the week 500 soldiers were down with it. American soldiers going abroad spread the flu across a Europe that was weakened by 4 years of war. Vast armies, an exhausted continent, ruined countrysides – it was ripe for a pandemic across the world.  Five hundred million caught the flu – 100 million died. Why was it called “Spanish” flu? Because the war went on for another 9 months. War, and security issues, prevented good reports except in neutral Spain.